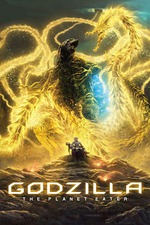 Despite a cool design idea, Ghidora was butchered and wasted here. The Mothra cameo was pointless and came too late. This film doesn't get to graft the moral messaging of prior Godzilla films onto it in the final act of the last film in this trilogy with no prior setup. The fundamental problem with this trilogy is that Godzilla isn't all that engaging. He's slow, he's tough to kill, and sometimes he shoots lasers, but the increased scale (in both size and time) makes him less believable, less visibly dangerous, and not very engaging onscreen. Say what you will about Godzilla (2014), but when Godzilla is onscreen, his movement and visceral power were evident from his first footstep. Here, I felt like I watching a Galapagos Tortoise as opposed to a T-Rex. Skip the whole series, or just watch the first one if you've already seen the rest of the good Gozilla movies.

Godzilla: City on the Edge of Battle