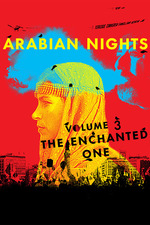 Arabian Nights: Volume 3, The Enchanted One

By far the weirdest of the Arabian Nights trilogy, The Enchanted One often feels as if its score, on-screen text, and image are working on three different planes. Short from working against each other, these three channels collaborate to make a chaotic and perhaps technically revolutionary work that seems to have less of the overt metaphor or political message of the first two volumes. Instead, the content's relationship with the state of modern Portugal is a bit tougher to grapple with, though there are surely things to be said about the silly songbird competition and its centralization of much of Portugal's time and money on something pointless and useless. The photography is beautiful, once again, and this entry into the trilogy stands well on its own but wraps up the series nicely, seeming to be a bit more forward-thinking than the other two.