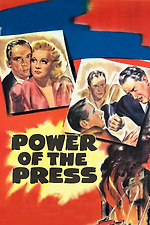 Power of the Press

"I'm going to ask you, is this constructive criticism? <<Churchill schemed and stalled until they dragged us into England's war.>>"

Answer: yes, movie, yes - it is the very definition of sober criticism!

Faux-Capra (emphasis on the faux), faux-populist b-movie embarrassment, penned by Samuel Fuller as a wartime treatise on "the Freedom of the Press and the Power of the Press" (they repeat this asinine line 5 or 10 times). The kind of film made by the same class of people who actually control the media and the flow of information in our societies, exposing how their Libel Machine (or Yellow Press - or "Fake News", per "post-Truth" terms) actually and viciously works (e.g. exploiting "angles", instigating social mistrust and even riots, "unpersoning" material witnesses to crimes, thinking of the People as "saps", etc.), but then expertly slighting the hand and putting the blame for the rot on... American isolationists (I'm not making this up!) and equating them with - whom else - ze Nazis!! The "idealistic heroes" of the story eventually win the day by staging and printing their own "fake news" and extorting the cartoon bad guy/scheming publisher with them while quoting Lincoln to his face. "Two sides of the story?" Two sides of the exact same political sandwich, I say!

P.S. I remain undecided on whether Fuller was a genius (Pickup on South Street) or a fraud (this and The Crimson Kimono).