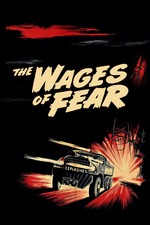 HENRI-GEORGES CLOUZOT, 1953, Starring YVES MONTAND. I’ve turned every page of the hard copies of my movie lists and have run searches on every electronic movie list of mine, and I can’t find my first viewing of The Wages of Fear which happens time and again, I swear, defeating the goddamned PURPOSE of these lists that I’ve kept since I was fifteen! I know only that I saw this on TCM touted by the great, late ROBERT OSBORNE, probably between 2002 and 2007. Whenever it was (I haven’t given up finding it yet!) it was just long enough ago that I didn’t remember, this second time viewing, what would certainly constitute spoilers. So I’ll say once more that age is an effective eraser—thanks to which we would be perfectly fine if no films were ever made again! Enough truly great, timeless movies exist to get us through the amount of time it takes memory to forget, at which point we can watch the great titles over again, for the first time, a second time. I'm being 1/2 facetious. The Wages of Fear is a better film than you’d think possible for 1953, if you’re young, I suppose. Were it to be made in 2021 it would still take the Best Foreign Picture Oscar. There’s an hour of quality characterization which doubles as still-relevant social commentary (and also functions as time travel to a place that no longer exists, of men riding donkeys even as others thunder by on work trucks like the one pictured in the film’s advertisement) before the ~second half~ of the film with the nitroglycerine begins. At that point you’re in for a 90-minute sequence that should be taught in film school. Hell I’m thinking of using it in my English classroom. Hitchcock had to have admired it. The humanity of the sequence goes beyond anything Hitchcock achieved and never before has a filmmaker drawn out a single suspenseful idea for that amount of time. Spielberg probably referenced it in Duel, but compare the two and you’ll see how many tricks Spielberg needed in addition to the simple cross-country travel of two vehicles. The Wages of Fear is (drumroll) one of my favorite movies, as of this sentence. From IMDb: In a decrepit South American village, four men are hired to transport an urgent nitroglycerine shipment without the equipment that would make it safe.