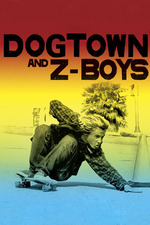 Dogtown and Z-boys is a documentary that covers the culture revolution of skateboarding from a pompous sport into a grungy adolescent playground of dangerous excitement.

I thought the documentary was pretty brilliant, it’s whole structure made it feel less like a skate story and more of a personal one following the original Zepher Team. Each member becomes their own character and it’s a clever choice by showing them at their roots of surfing to their prime of skateboarding.

I gotta make a comment on the filmography of this documentary because it’s so fucking nostalgic, the 4:3 aspect ratio, the camcorder like quality, the amazing soundtrack of the 70s it’s just such an enjoyable watch.

However there is this one very strange technique used where in the interviews parts of it are fast forwarded visibly, it’s strange because it left me angry that I didn’t get to hear these interesting people talk about everything they had to say instead it’s literally silenced in front of me.

It’s a pretty great documentary if you like skateboarding or 70s culture.