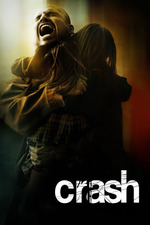 The fuck was that? Was Paul Haggis delusional or was scientology just pumping him full of praise? But scientologist didn't make this movie, a lot of other much more talented people did. Why would Terrence Howard choose to play this role? Why Michael Pena? Why Don Cheeto? Brendan, what happened? How can you go from the Mummy to this?

Okay, in all seriousness, this is not as bad of a movie as people make it out to be, but thats just my opinion. Its shot alright and some of the performances, in the rare quiet scene, were good. But I cant really think of anything else that is good. Maybe just that its so over the top thats its funny a lot. Like everybody in this just goes from 0 to 100 because they felt their heart beat. Don Cheeto is the best at this. His racist slurs are so poorly written but he delivers them so calmly, its hilarious.

I think what most people dislike this film for is the writing and specifically, the way the dialogue and story structute explores race relations. While I don't love Spike Lee, Do the Right Thing does a similar thing but way the characters express their racist views are so much more real and nuanced. In Crash people (of all colors) just belligerently start yelling at one another. Okay, so everybody has the capacity to hold prejudice? How profound. The real issue is that it isn't saying anything, so I you can't really hold it up and say "woke". But its also just so poorly handled on a story level, so the only entertainment you can get is laughing at the false tightened emotion.

The biggest crime though, was the ending. In a move that I'm sure made PTA throw up in his mouth out of embarrassment and disappointment, the movie ends in a sequence clearly going for something similar to the "wise up" scene from Magnolia. Number one, that scene isn't good because a sad song is playing and all the characters are somberly standing around. Number two, Magnolia built these complex characters up for two and a half hours before this, at a breakneck, engaging pace, so this moment is earned much more. Number three, in Magnolia, the theme of human interconnectedness is important to the whole of the film. In what way does Crash explore this theme at all? Number four, this is how the movie ends and it just comes off as so pretentious compared to Donnie Darko. Number five, and most important, Ludacris (who by the way is beyond tterrible) frees a number of Asians that were being sold in human trafficking (I think). What was that? That was bizzare and not how you end a movie.

Not the worst made movie, but one that has no reason to exist. Maybe I'd be more critical if I hadn't been drinking but as of thirty minutes removed from this car-wreck, I feel like it was actually better than expected. I'm drunk though, so.