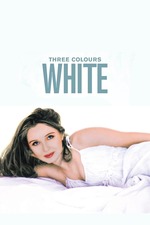 Okay, first off. The elephant in the room. The somewhat muted response to THREE COLORS: WHITE from self-confessed cinephiles and even so-called Kieslowski buffs has proved all-too telling. What I can’t shake is the sense that this is what he wanted all along. For one, WHITE is Kieslowski through and through, giving off extreme ‘extended episode of DEKALOG’ energy in content and even presentation. A funny turn of events given that I’m only after watching SHORT FILM ABOUT LOVE, a literal extended episode.

Allow me to elaborate. Compared to BLUE, the DEKALOG is an almost easy comparison to make but I promise you it fits. For one, we’re dealing with a dual-edged sword of moral crises here, in that wholly DEKALOG-ian manner of taking two people with distinctly opposite views or situations that are drawn towards each other regardless. And slowly tearing away at their corrosive insides to reveal entire lives-worths of hidden desire, untapped secrets, ulterior motives, and true colors. Whether they are conscious or not. Part of Kieslowski’s prowess is that he allows us to discover more about his protagonists alongside them, often uncovering whole pieces of their being on this journey of self and having us right there, as judge, jury and sometimes even executioner.

It’s why both this chapter in his famous trilogy and his all-consuming series ring most true to me. We go along these journeys with the characters, but also with ourselves. But doesn’t he always do this, Cormac? Yes, I suppose so. I guess what I’m trying to get at is that these two late-career works operate on the same wavelength. The casting of Zbigniew Zamachowski and King Jerzy Stuhr (the same two actors as DEKALOG X, seen here again playing estranged brothers brought back together) hardly helps matters much. But I think what it all boils down to is a feeling they evoke in me, of being taken on a journey from A to B. Where BLUE hooked us in with it’s ocean of color and the invention of emotions we didn’t even know had existed for us to feel, WHITE keeps the stylistics straight-laced for the most part to really dive deep on character. Instead of inventing an entirely separate filmic universe, he goes back to the one he had known before, the one of layered moral philosophy as a means to psychologically stirring narratives.

And is this not just the MOST Kieslowski move? Behind every frame, I can feel him laughing while writing, behind the camera, in the editing booth at the bait-and-switch he had pulled off here. it’s fitting then that this would be one of his most sneakily accessible to straight up enjoyable. If you know what you’re in for. Sure, nobody would blame you for expecting a color-soaked sensory-overload coming off of the back of BLUE. Likewise, you would hardly be at fault for imagining a Julie Delpy vehicle to be the name of the game (or even, spoiler alert: for the French actress to show her face for more than a few choice sequences) given the poster, general marketing and y’know, the other two entries in the damn trilogy.

Still, this is a tough nut with plenty of truth inside if you can crack it. Gritty on the surface and highly playful if you can allow yourself to remove the pretences and find an in. Kieslowski has a big bone to pick with the Polish inferiority complex, and he waggles his finger loud and clear with the aid of some cutting comic irony. Setting up his moral tale like a Jenga match of constant humiliation, the tragicomic Karol Karol finds himself on a wild goose chase in the search of equality as a means to find peace within. While never laugh-out-loud funny, there is a resounding sense of ‘if you didn’t laugh, you’d cry’ at the sheer, acidic hypocrisy of only finding equality in the acceptance of someone else. Personally, I found myself smiling throughout with the reminder of Kieslowski’s ability to pull all this off, drop big truths, and have us questioning everything all at once.

The big question here then is, does all this make it unworthy of the Colors moniker? I’m not so sure. But I’m sure glad he didn’t feel the need to retrace his own steps, step on his own toes or box himself in for the sake of needless narrative ties. I’ve also got a pretty good inkling he’s up there somewhere now, still laughing at how his master scheme had gone exactly to plan.

That was a blank. The next one's real. Are you sure?

Watched with Lara, who had a slightly different but just as valid take on the whole matter.