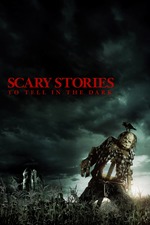 A lovely nostalgic horror which channels the glorious horror anthologies of the 70's and 80's into a more singular and ultimately more fulfilling narrative.

The eve of the US elections in 1968 and a band of teen misfits seek shelter on Halloween in the bowels of the local haunted mansion. The previous (and often rumoured current) resident was a young girl kept prisoner in the basement, who's only outlet was telling scary stories through the walls to the other youngsters who would dare to come up the house and its her storybook that our intrepid band find and remove from the house, who then can't really be that surprised when new stories begin to write themselves, involving each one and not ending well for anyone...…..

The 1968 setting is really important as it infuses the entire film with that warm glow of a more nostalgic and familiar time, which conversely also helps in setting the horror slap bang in the middle of this not very horror-y locale. The youths are all charming and likeable and even though we're firmly in stereotype territory, they're so familiar, like the setting, that we’re instantly onboard with them and their tribulations at the hands of our spectral storyteller.

The individual stories are more like extended setpieces rather than standlone episodes, but all have an edge to them that bely their intended teen audience - a scarecrow that turns a teen bully into straw, a zombie woman searching for her missing toe and a body made up of individual parts that have their own life, giving the whole a freaky contortionist feel, all are pretty grotesque but hugely effective.

In fact the only complaint is that these individual parts don't feel like they belong as part of the same whole, all seemingly random and coming from within each of the teen's deepest fears. But this is a very minor issue, the film as a whole being a lovely and satisfying ode to a time when scary houses were scary because of the simpler things in life such as cobwebs and ghosts and school bullies.