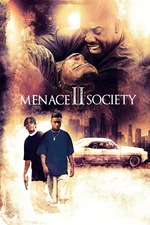 I think that somewhere along the line, the work of the Hughes Brothers was lost in the line of “hood movies” that followed the debut of John Singleton’s Boyz n the Hood.

That’s not to denigrate New Jack City, Juice, Clockers, Colors or to try and say I wasn’t laughing through most of Don’t be a Menace to South Central When You’re Drinking Your Juice in the Hood (because I was). But Menace II Society is a brewing kettle of thematic commitments and street hewn shooting techniques that boil over into a punchy and vital narrative – the calibrated sensibilities are gritty, violent, tough, and serious but not self-serious (though some moments are a bit on the nose). The film is a remarkably non-exploitive, intelligent, and powerful look gangster life lensed through the tangential format via two friends of contrasting but similar characteristics that can be seen as victims of their own fate, or cogs in a system that fails everyone. Menace II Society stands on its own two feet mainly due to the overall naturalistic conception of the film from the Hughes Brothers, who not only directed but wrote and produced a stellar feature debut. Having said that, this movie is an important hallmark in the larger conversation of Black Cinema, in that Menace II Society is an independently produced film in league with other such works from Charles Burnett, Spike Lee, Melvin and Mario Van Peebles, and recently (in terms of the film’s release) John Singleton with his seminal 1991 film Boyz n the Hood. It’s almost impossible to discuss Menace II Society without contrasting it to Boyz n the Hood, while Singleton’s debut is the kind of film that had as much to say as it did show, Menace II Society is less preach and more teach. A revealing and graphic turn that’s indicative in the neo-realist spirit, as well as being in the mold of the American New Wave, as well as a film that aims to entertain, without pulling punches or taking an easy way out. The Hughes Brothers know the rhythm and timing of a movie and their debut feature is intelligently assured as it is visually engrossing. Influential modernism was a fundamental requisite by the time this film was made and the Hughes Brothers evoke the spirited energy of the gangster films preceding them and, in proving their aesthetic prowess, utilize the malleability of the medium. The result: A recognizable genre film that reinvents itself through self-evolution from “gangster” to “gangsta” without embellished glorification. The reflective impression of Menace II Society is always a reference point to the hood movie subgenre before and after its inception and some lazily handled interpretations have condemned Menace II Society, stating that it’s comparatively paled in the shadow of more contemporary criminal iterations on television such as The Wire or The Shield. But, the very notion of judging something for being surpassed by the work it likely inspired is moronic.