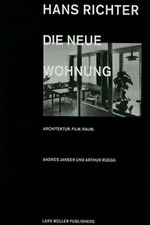 Ironic that a prominent Dadaist filmmaker would agree to do a half-hour long commercial aimed at the bourgeoisie.

Still, Richter's trademark editing and privacy-invading closeups are featured throughout the short, along with his rudimentary short stop-motion sequences, making it not a total sellout thing and more of a side project of sorts. Another thing prominent in the short is the symbolism of "advancement", clearly depicted with a sequence featuring medieval paintings of tools from that era literally being pushed away by small segments of their modern equivalent.

About the actual content of the film, it's pretty interesting and curious to see the type of architecture and furniture considered modern in pre-WW2 Europe and how the concept of it - at least for the architecture - hasn't really changed that much in almost a century. Yes, the furniture is really outdated and classical by today's standards, but what concerns the actual "modern" building structure and looks, I'd say it's not that far away from more known modernist architecture from the 70's.

I'm not an expert nor am I that interested on historical architecture, not even close, but I still did sort of enjoy this. It's not the normal concept someone would have of an enjoyable film but it's not tiresome or heavy either.