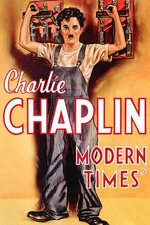 The past meets the present in Chaplin's 'Modern Times,' acting as a lovely commentary on the future, industrialization, and especially the Great Depression, where many poor and homeless workers found themselves wildly desparate to acquire a job, no matter the conditions. As is always the case, Chaplin applies his typical hilarious flair of comedy to events involving malfunctioning machinery, breaking into department stores, stopping jailbreaks, nervous breakdowns and more. Out of all of his work I've seen thus far, this one was absolutely the most hilarious and easily my favorite one.

As the film opens, we find The Tramp is a factory worker, screwing bolts all day on an assembly line, which is obviously more than routine for him. After having a nervous breakdown, he quickly finds himself in jail, where he accidentally snorts cocaine and somehow manages to stop a jailbreak, which gets him released. Once he is, he finds himself yearning for his time in jail, a life that seemed much more suitable for him. Fortunately, it isn't that easy to return, and he manages to fall in love instead, opting to take care of his possible girlfriend and (hopefully) acquire a job to do so. Cue the wild antics and crazy coincidences and knee-slapping, riotous moments as the film rolls on.

This truly is the best Chaplin/Tramp film I've seen thus far. There was something at least once a minute to make me chuckle or bark out laughter, and while the film opens and closes with some grandiose sequences involving the nuts and bolts and cogs of machinery life, the rest of the film instead chooses to focus on more smaller sequences: the aforementioned, accidental cocaine indulgence, a cute and dangerous roller skating sequence, a run-down shack that proves dangerous, and more. It was varied in its moments and consistently funny in them, too. I'm not sure how expansive the world of Chaplin's The Tramp gets, but I've been a fan of every one I've seen - this one, however, jumps right to the top of the list as the best, further cementing Chaplin as the legend he was.

The Ace of Hearts