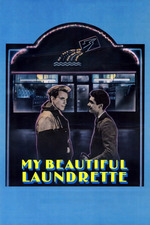 "You have to know how to squeeze the tits of the system."

With 'My Beautiful Laundrette,' Stephen Frears paints a beautiful portrait of homosexual romance in 1980's London mixed with working class youth, with an almost delightfully self-sacrificing breakout performance by the incredible Daniel Day Lewis and a very playful, ribbing script that levels its comedy in a way that can be seen as harsh or taken as a bit too far, at times. The centerpiece of the film is a beautiful gay relationship, reignited after several years of absence, as the two main characters beautifully tiptoe around to ensure their secret stays just that, while simultaneously being allowed to love one another in private.

Gordon Warnecke plays Omar Ali, a young London man who spends his days taking care of his ailing, alcoholic father. Through familial contacts, he manages to get a job with his entrepreneur uncle, Nasser, washing cars in one of his garages, yet is quickly elevated to a new position: overseeing management in one of his launderette sites. As he seeks to revitalize the place and make it more appealing visually, he runs into an old flame, male skinhead Johnny (Daniel Day Lewis), and the two quickly pick up where they last left off, much to the surprise and secrecy of everyone else in their lives.

This film is definitely a product of the 80's, both in terms of its visuals but also its placement in time politically, a Margaret Thatcher led London where the relationships between these varied cultures were certainly unique. Hell, even in the 1980's, homosexuality wasn't the most commonplace, accepted societal norm, of sorts, and thus, the events that transpire throughout are logically kept secret and tucked away for reasons that make sense. I do wish at times that the romance itself took the center stage here and didn't delve into the crime aspects and familial disputes as much, but at the same time, I really did love the family angle here, focusing on Ali's ties with them and how their relationships grow strained as Omar rises up in the world. The performances are fairly solid, but Daniel Day Lewis is the one that obviously shines here in one of his first major roles, balancing the brutal skinhead with the loving, homosexual romantic. It's a uniquely beautiful film, albeit one that I wanted a little bit more from.