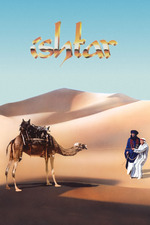 I think the critical response to Ishtar has generally rebounded from the infamous contempt around its release, but not to the extent that it's actually talked about anymore. This is understandable -- in addition to being the end of Elaine May's directing career, it belongs to that liminal period of American pop culture in the late 80s and early 90s when the silent generation was passing the torch to boomers as the dominant cultural force, when New Hollywood production design was peaking immediately prior to winking out, and when political satire was just on the verge of being heightened beyond the point of effectiveness.

Ishtar's exoticism is both good-natured and reflexively critical in a way that might not pass for either by modern standards; it's Romancing-the-Stone, Raiders-of-the-Lost-Ark pulp misadventure and camel sight gags at the same time as it's constantly reminding you that the CIA are a paranoid global nuisance and Americans can't help but be compromised by them. Its version of New York comes on as strong as it possibly can so it can get out of the way immediately -- lots of Saul Bellow in here -- and so that Warren Beatty gets to act like a real doofus when he's groping earnest young communists 20 minutes later. The casting is similarly on the nose for the era. Dustin Hoffman gets to do his usual WASP buddy duo routine (and spends one early scene doing an exact impression of Leonard Cohen in profile, just because he could), Carol Kane gets her regular two minutes, and Charles Grodin makes a good spook.

The worst criticism I can level against it is that it feels way too short in practice. Ironically, during an extended Lawrence of Arabia riff about two thirds of the way through, it stops functioning as either a character study or a fun international romp, and devolves into each of the leads basically doing bits, without quite committing. By the end of the film, you get the impression that the traveling musicians setup was a premise to tell a totally different story -- like The Three Amigos if it were the first five minutes of a golden age Simpsons episode that was actually The Living Daylights, except more Jewish -- and as the music cues increasingly suggest that Elaine May meant to make her own North by Northwest, it can't help but be a little too small scale and a little too grounded.