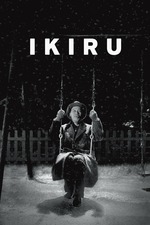 All Akira Kurosawa's films with contemporary settings have a moment where, after a discussion has established that a lot of people think the issues involved in a given social situation are complex, one character dismisses all this and offers a childish black/white analysis which is clearly given the director's approval. Kurosawa was a great graphic artist. He was also a dunce. His attempts at social analysis are always limited by his aristocratic cluelessness; they always proceed from the assumption that all social ills can be solved by an authoritative individual turning up and barking "behave yourself!" at the lower orders.

For this film to work, you have to believe:

1: That all local government employees could make anything you personally want to see happen whenever they'd like, they just choose not to because they're lazy/corrupt/too cowardly to challenge the laziness/corruption of everyone else.

2: That if one of them found the courage to challenge that culture, the others would fall into line immediately because anyone not of the samurai class has a genetic need to obey orders.

3: That Yakuza would be intimidated into compliance by an ill guy making big eyes at them.

The example of Kurosawa raises a question about the directors who film studios and distributors package and promote as "great artists". Why should being obsessed with the idea of making movies, churning out screenplays and treatments, and then drawing hundreds of storyboards, make your social/political opinions worth listening to? More than anything, you want to work in the make-believe factory; how could you possibly have anything even averagely insightful to offer on major social issues? Indeed, Kurosawa's insights, as expressed in this film, are cretinous, the kind of thing a pampered adolescent would come out with. This film was praised for its "humanism" when a patronizing acknowledgement of the humanity of "little men" was thought to be enough by the bourgeois Western (and Western-influenced) audiences to whom Kurosawa's films were sold. It isn't enough now. This isn't a question of being dated – contemporaneous films by Ozu, Mizoguchi and Naruse manage to depict ordinary people without insulting them – it's a question of being unwilling to understand inconvenient information. He got better on this front later.

Despite his intellectual limitations, Kurosawa made some great films. Ikiru, on its own terms and on the terms in which it's generally praised, isn't one of them.