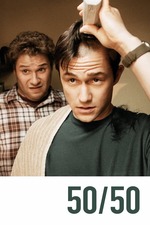 Synopsis:
Joseph Gordon-Levitt stars in the dramedy, 50/50. He is a 27-year-old man named Adam Lerner who has just been diagnosed with a rare cancer. Right away his best friend Kyle (Seth Rogen) his girlfriend (Bryce Dallas Howard) and his mother (Anjelica Huston) each have different ways to approaching this difficult time in life. As Adam begins to navigate this as well his own stages of mental and physical progression, he also starts seeing a young therapist Katherine (Anna Kendrick). The reality of the situation continues to fold as his potentially only 50/50 odds of surviving constantly looms in the back of everyone’s mind.

Review:
50/50 has some good ideas on the surface. The bright spot of the film is the therapy sessions and building of chemistry between Kendrick's and Gordon-Levitt. The relationship between him and Dallas Howard’s character was fall less interesting. She is demonized quite early in the film, for not much reasoning and their fallout seems quite forced. I also did not feel like Adam was the type of character to even reject her wanting to come back to him and seemed odd he had never told her he loved her even though they were living together. Seth Rogen’s character was meant to be a strong comedic balance to overtake the dark aspects of the cancer. He has always been a character that you have to get on board with his personality since he plays this role over and over and has since the 40-year-old virgin. His selfish actions to use cancer to try and get laid and all that angle was just an unnecessary thread to try and make his character shallow and it made little sense that he would just come around and be a better friend. The mother relationship was atypical and the father as the Alzheimer’s patient was poorly done and felt as if it wanted to explode into another subplot narrative. It does no such thing, and his mental state is boring with respect to his condition especially if anyone has dealt with people and this condition. 50/50 on the surface tries to gather realistic perspectives and culminate this into a real movie. It succeeds on this for the most part, but the characters and other dramatic efforts sprinkled on top just drive this picture in a worse direction.