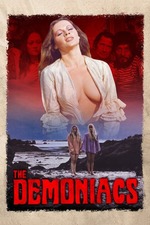 Though Rollin has been accused of being single-minded in his approach, I feel like his films each have a distinct "flavour" (while still forming a cohesive canon of work); there's the bloody zombie schlock of The Grapes of Death and The Living Dead Girl, the urban, psychosexual vibes of Night of The Hunted, the lyrical, melancholic Lost In New York and The Iron Rose and the campy, gothic horror of Requiem of the Vampire.

The Demoniacs, though occupying his usual dream-world of stranded beaches, ivy covered ruins and gothic cemeteries has a grittier (might I say trashier) feel than you might expect from Rollin. Its antagonists are coarser and more mean-spirited, its violence more laboured and gratuitous. It also boasts a larger ensemble cast than is typical of his films and one of his most colourful, a veritable sideshow of vicious pirates, bar wenches, female clowns and an ambiguous personification of the devil himself. Though it feels like something of an outlier in his filmography, it's most akin to Requiem in its ren-faire-on-Halloween aesthetic.

As always, Rollin's handling of his female characters is compelling; though sexually objectified, they're always the driving force of the narrative and ultimately the most memorable figures of his films. Here, Joëlle Cœur is the standout as the feral pirate Tina, delivering an unhinged and unambiguously villainous performance.

All-in-all, The Demoniacs is an anomaly for Rollin in many ways but still showcases his usual beautiful cinematography and unparalleled ability to create atmosphere. A grimy and unheralded gem in his oeuvre.

Sleeping with the Devil