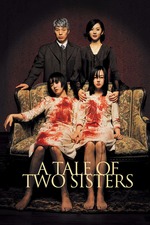 So the moment I saw the blood-stained poster I knew my family needed to watch this movie just so I could keep making the joke that, well, they’re me and my sister.

It quickly became clear that wasn’t really a joke I wanted to make, neither was it a joke I had time to make because all brain power was dedicated to trying to piece everything together.

We saw the twists coming, but even after having finished the entire movie, I’m still confused. I’m very frustrated.

It’s gorgeous and creepy and Asian horror is really vastly superior to everything else, but I’m just disappointed in the story reveal at the end. It requires you to believe that the characters are really quite insane / disturbed / illogical, which makes sense for a messed up movie but also just leaves you frustrated. I’m struggling to rate it as a whole because technically it aces everything in the creepy department (and the acting department!!), but the story leaves much to be desired for me personally.

I Lost My Body