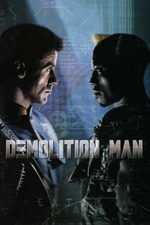 Totally ridiculous and poorly realized, but really damn fun and inventive in it's own way.

Sure, the core idea of this movie is brought down a little by the muddy way the origin of this new society is explained (and the fact it sprung up in only about 50 years), but when this is ostensibly a dumb 80's-but-released-in-the-90's action sci-fi plot doesn't matter a whole lot. There are bad guys and a bad society and Stallone has to be crass and shoot stuff. Honestly, the action is fairly unremarkable, being well-executed but not too amazing. The real draw and the reason this is remembered at all are all the details of world building that lead to great comedy and really stick in your brain. Such as:

- The best running joke in almost any movie of the fining machine for cursing (going off occasionally in the background due to dialogue)
- The Taco Bell stuff, I think one of the smartest bits of product placement for genuine comedy value
- Stallone's implanted knitting ability
- Wesley Snipe's semi-Robocop twist near the end
- The parody of the Barbarella brain sex
- The Zoom call monitor stands that rotate

and on and on. So much is mined from the premise and it gels so well. Acting-wise, most of it is so-so (the bad actors are buffeted by their ridiculous chirpy personas) with Stallone kind of just doing his thing. Snipes steals the show for how exuberant he is with destruction and for rocking his 90's rave-punk look. A stupid movie to be sure, but clever where it needs to be and fun on pretty much all levels.

Joe Pera Talks You to Sleep

Once Upon a Time in Anatolia