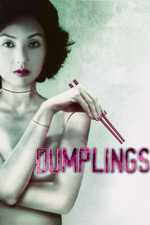 The most significant and unique aspect of Dumplings is the frankness with which it treats its premise. You almost immediately what's going on, as do a lot of the characters. The horror comes not from slowly finding out what's going, but the kind of resigned nature that this subject is treated by most of the characters. Throughout a lot of this, I assumed this was Fruit Chan's message on the frankly horrific food traditions in China and other parts of Asia (especially with the drawn-out sickening shot of the husband eating Balut, or chicken embryo). While I think that's true, it can be broadened out in general to talk about how people are treated as objects or tools for one's gain. The way all characters interact with each other, everything seems like a deal or bargain; love is a very distant thing in a world like this.

With this being one of his only big films, I wonder why Fruit Chan didn't catch on generally. The static, clinical shooting style he uses fits a lot of what his contemporaries in Asian horror were doing (especially Miike) but the way he uses it distills all the shock down to the premise.
The discordant, aggressive soundtrack is also a highlight. Much like Under The Skin, the drony tone of many parts of it helps accent the depressive feeling of the story.

Negatives are few, but I did find the sex scenes a little excessive. They have a thematic purpose, but I felt like they took up too much of the screen time. Other than that and an ending that fizzles out a little bit, this is a great atmospheric horror-drama and one that I think has been too overlooked by a lot of people.