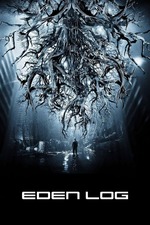 Apparently I'm the only person who really loved this movie, but to me this was a really original and interestingly shot dystopian piece. Sure, there is more than a few Bioshock comparisons to be made here; the progression of the opening scenes feels very close to the entrance of Rapture. However, the idea of bio-futurism is one I haven't seen a lot in sci-fi film (with Annihilation being the only one that pops in) and that coupled with the moody and grim atmosphere made this stand out a lot to me. Although the exposition did seem a little drawn out in general, I liked how the movie let you piece together not only the events that took place at Eden Log but the reason for it being there in the first place. In some ways, I almost think they could have left more of it open-ended for something later on (the ending kind of destroys that hope) but I liked that the world-building felt fairly subtle or at least kept to a minimum in the right way.

Personally, I also think this movie did a great job working in a small budget. The events of the movie preclude it being dark and dingy, but I liked the pseudo-B&W look. The lighting and framing of things made shadows feel richer, so that when color came in a little bit it didn't seem too muddy or ugly to look at. The only definite negative I can give this is the pretty low-quality acting. Granted, most of the movie is almost silent or told through robotic voices, so this can most of the time be ignored. I also think that since a lot of this movie relies on the piecing together of the story it would suffer a lot on re-watching; especially when dealing with the slow pace. Overall, this was a new and interesting approach to a dystopia, and I think there's a lot of expansion that could be given to this world and the ideas presented.

Journey to the West: Conquering the Demons