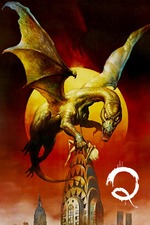 Although it's not very good, it exudes that special brand of Larry Cohen weirdness that we'll never see again. The blend of mundane New Yawk goings-on with summoning an ancient god in the middle of the city is a pretty unique one, but Cohen doesn't do much with it other than a half-hearted Harryhausen homage and some seemingly pointless scenes. The idea of Q being that type of puppet was a neat one, but the method of blending that puppet into the environment like Harryhausen did wasn't even tried making it look even worse by contemporary standards. I did like the cinema verite feeling of a lot of the movie, as if Cohen and crew ran out into streets and buildings around Manhattan, shot a roll, then ran off to the next street. Random streetwalkers being splattered with blood or far shots of people rushing to a body gave me some early Cloverfield vibes; and if Cohen had explored this pseudo-documentary approach it might have been really interesting. As it stands, this movie is a unique little oddity but feels too loose and quick to be worthwhile.

Cinema verite, running in to shoot then running out