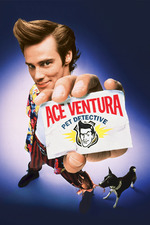 Ace Ventura: Pet Detective launched the career of one Hollywood's biggest stars, made over $100 million worldwide on a $15 million budget, and empowered a nation of idiots to scream "Alriiiiiighttttty then!" any chance they got. For better or worse 'Ace' is one of the defining comedies on the 1990's and it's pop-culture footprint cannot be overstated. But anytime I come across it on television I can only think of one thing - a guy named Stefan and his bloody thumb.

Now before I get to Stefan I should give you a little backstory. To say I was a bit of a hellraiser with self-destructive tendencies when I was between the ages of 16 and 18 would be an understatement. I mean, living hard is your only option when you're driving around in a 4-cylinder Mustang packed with shitty aftermarket stereo equipment blasting Snow's "Informer" and puffing Mexican ditch weed out of a skull pipe. Clearly I could "licky-boom-boom down" with the best of them. But a series of bad decisions led me down a dark road that had some serious consequences. Well, I mean as serious as consequences can be for a middle class white farm kid from rural Minnesota.

Anyway, I had the choice of a little jail time or in-patient drug & alcohol treatment followed by 3 months in a halfway house. Now, for the lucky few who've seen me in person it's obvious that despite my sturdy frame (6'3", 215, calves like a minotaur) my delicate, angel-like features would be irresistible to thirsty inmates. I simply could not risk my sweet honey biscuit. So, despite a solid understanding of "life on the streets" and what it takes to survive (my mom took me to Musicland when I was 15 and bought me N.W.A.'s 'Straight Outta Compton' so I was clearly prepared) I decided to spare my family anymore pain and take the treatment route.

Now, someday I'd like to share the experience of what I witnessed over the next 30 days. I was an 18 year old kid tossed into a fish tank with hardened criminals, broken alcoholics, hardcore meth freaks, and some genuinely good people who simply lost their way. I wasn't addicted to anything except "fucking up" so this was basically a "scared straight" program for me. And for the most part, it worked. I love to joke, and tend to run from anything serious, but there wasn't a lot of humor to be found there.

(Well, except for the time I selected 'True Romance' as the Saturday Night Movie and nearly caused a riot when the counselor angrily ejected it. Sure, the addiction triggers, hot phone booth sex, and graphic violence may have been against 9th Floor protocol but I don't regret it. The chance to show simple folk a slice of PURE CINEMA was too great to pass up. Plus, we had to rent from a Kwik Trip and the selection was shit.)

Once I finished up I was on my way to the halfway house to continue my rehabilitation. This proved to be a much less intense experience but it still opened my eyes to a world I hadn't seen before. The halfway house was mostly about routine, building structure, and trying find a balance between your old life and your new one. Cool, I dig that. I was just killing time and running out the clock but had a genuine respect for what most of those folks were trying to accomplish. Hell, some of these people had prison time dangling over their heads or families holding on by a thread - so every day battle to keep their lives together. I imagine that's a tough way to live.

See, every Saturday we'd check the board to see what our assigned duty was - stock the pantry, vacuum, dust, mow the lawn, etc. etc. Standard stuff and none of it fun. But there was one job everyone hoped they'd see their name on those weekend mornings - room inspector! The inspectors would get to go through the rooms, make sure they were clean, look for contraband, and basically walk around for 90 minutes while everyone else busted their asses. It was the job everyone wanted.

Well, be careful what you wish for.

As I finished up breakfast I heard the unmistakable voice of Stefan bellow "Walsky! We're on rooms! Move your ass." They always had to send two people to inspect the rooms so there was a witness if any contraband was found or some property went missing. So I slug down some coffee and head to the front desk so we could get started. As I turn the corner to the kitchen I see a shirtless Stefan suckling from a 2 Liter of Mountain Dew like a newborn calf. Just a ghastly site. Oh, did I mention he's a weird looking sonofabitch? Eyes black like a starving sewer rat. Stringy blonde hair that constantly stuck to his perpetually greasy forehead. Yellow teeth that looked like a row of old urinals. Faded jailhouse tattoos covering his admittedly ripped physique.

Stefan was quite the specimen.

He was also an obnoxious braggart and a pathological liar. One of those guys who always had a story just a little better than the one you just told. He's been everywhere, and done everything, and met everybody. It was fucking obnoxious. So when he casually mentioned that he was in the movie Ace Ventura: Pet Detective I laughed it off. The more I dismissed it the angrier Stefan got so he promised to rent it and shut me up for good.

And shut me up he did.

I walked into the living room a couple days later to find a grinning Stefan sprawled out on the couch with a VCR remote dangling from his hand. He motioned towards the TV and said "told you I'm a movie star" as he clicked play. The movie was paused on the early scene where Ace walks into a heavy metal club and the band Cannibal Corpse is onstage. At the :29 second mark of the embedded clip the door opens, Ace walks in, and in the middle of the frame is a shirtless headbanging weirdo. That's Stefan. And true to his egomaniacal personality he can't resist looking directly into the camera. The dude is an abolsute freak but I can't deny he's in the movie Ace Ventura: Pet Detective. For those of you still reading here he IS.

(and that, my friends, is how I make another self-serving personal story a Letterboxd "movie review")

Anyway, back to that fateful Saturday. Everything was going by the book during our inspection and I could almost taste that stale Winona Cinema 4 popcorn and flat Cherry Coke. We had successfully checked off 7 of the 8 rooms and were ahead of schedule - only Aaron's room was left. Plus, I had just picked up a cassette tape by a new powerhouse band named Sponge and was ready to blast their hit single 'Plowed' a couple times before we took off. I figured we'd breeze through Aaron's room and I'd be firing up my Sony DiscMan and rocking out like a God in no time.

Now, Aaron was a sweet but troubled young man who I was fond of him mostly because of his innocence. Unfortunately, he was one of those guys who had rich parents that didn't know what to do with a reckless kid so they just ended up stashing him in treatment. He could leave at anytime but he never did and I think it's becasue he finally felt like a grown-up. It was obvious all of his stories were complete bullshit but he was just so desperate to he "hard" the older guys just rolled with it.

Aaron's true angst came from one place - his on-again, off-again girlfriend who seemed to enjoy fucking with him. I hated seeing Aaron so confused and hurt. This was the only thing that seemed to cause him any real stress, but boy, did it get him wound up and send him to dark places. Unfortunately, today was one of those days.

As we approached Aaron's room we noticed the door was closed. This was a big "no-no" during room inspection and looking back I should've known something was wrong right away. Stefan grabs the handle and flings the door wide open. My eyes shift over to the bed and I see a sobbing Aaron lying on his side, his back to us.

"Get the fuck out if here, now" he hissed.

"Get up pussy, it's room inspection. I'm not fucking around today" Stefan snapped.

That's when Aaron rolls over and pulls out the biggest goddamn butcher knife I've ever seen. Michael Myers shit. I immediately recoil and slink towards the door. I'm muttering something about getting the counselor and leaving this to the professionals. I lock eyes with Stefan and can see he does not share this sentiment and I have the sinking feeling shit's about to go south quick.

"GET OUT! I'LL FUCKING KILL YOU." Aaron screams as I move myself into the doorway, hollering for Dwight the assigned counselor. Stefan on the other hand takes a step forward.

"GET AWAY FROM ME. SHE LEFT ME! I DON'T WANT TO DO THIS ANYMORE!" screams Aaron, the knife swinging wildly from his right hand.

I reach out to grab Stefan's arm and he violently slaps it away.

I can hear the thundering of footsteps coming up the stairs and my shouts turn to hysteric wails. My heart is pounding.

I watch Stefan lunge like a meth addicted snow leopard towards Aaron and reach for the gargantuan kitchen utensil. Aaron's eyes are as big as dinner plates and I could see sheer panic wash across his face. He instinctively brings his hand down to brace himself from the contact, and as he does the blade glides across Stefan's thumb and nearly severs it off. Stefan spins away -his face instantly the color of ash - and drops to his knees screaming. He's cupping his hands together, the shock setting in as he mutters madly about his warped appendage. Blood is everywhere, his thumb dangling like deformed sausage in a butcher's window.

Just as the staff arrives I hear Aaron scream "Oh MY GOD" and I turn to face him. He's white as a ghost. Aaron had somehow brought the knife down on himself during the melee and had a large gaping gash just below his left elbow on the inside of his arm. I've never seen blood come out like that. It reminded me of a chocolate fountain you may see at a cheap wedding or a Golden Corral. Thick, bubbling, and nearly black until it hit the sheets.

A few minutes later the ambulance arrived and took both Stefan and Aaron away. I don't remember a lot over the next 48 hours but I know they asked me a lot of questions and I did my best to answer them. I tried to add some levity to the situation (classic Walsky) by asking if 'Funday' was going to be cancelled. It didn't go over very well. I eventually made my way upstairs and curled up with my Sony Discman hoping that the artisans in Sponge could help me make sense of all this chaos. But it didn't help. Sponge was overmatched so I put 'Linger' by The Cranberries on repeat and eventually drifted off to sleep.

A couple days later we were informed neither Stefan or Aaron would be coming back. The only update offered was that they were both "ok" and if we wanted to speak with someone about what happened they'd assist with that. For a few days, maybe a week, it was all any of us could talk about. But like most things in life it drifted away like an early morning fog and we eventually moved on. Now Stefan and Aaron live as spirits in my brain that I conjure up whenever I watch Ace Ventura: Pet Detective.

Life can be weird that way.

This Is Spinal Tap