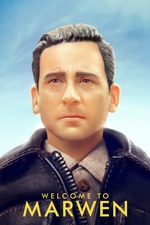 This screening was followed by a Q&A with Robert Zemeckis & Steve Carell.

Robert Zemeckis retells the story of Mark Hogancamp and the miniature world he finds comfort in after a brutal attack that took almost everything from him. Admittedly I thought a lot about Small Soliders and Toy Story, but not necessarily in a bad way. The overlapping of fantasy and reality works well. This is not a story of love, but a story of acceptance. Serious enough to tug at the soft spots, but lighthearted enough to let out a sigh of relief. I was concerned with the portrayal of women at first, but it let up as things unfolded- it made sense. The women are the heroes (this was also addressed in the Q&A).

Side note: This may be potentially triggering as it features a lot of war scenes re-enacted in fantasy, ptsd, and hints at suicide.

I didn’t know much of the story of Mark Hogancamp as I came into this, but I’ve definitely made a note to watch Marwencol soon. Possibility updating my rating for this afterwards.

Notes from the Q&A (possible spoilers):
-Robert was inspired by the documentary, Marwencol
-Robert & Steve were in frequent contact with Mark throughout the process
-Mark offered his actual pieces for the film
-Steve wanted to embody the character out of respect and not treat him like an experiment or replica
-Steve and Mark remain in contact and have become friends
-Mark now works with life-sized figurines in his art