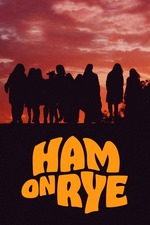 Taormina is not nailing the truth of the endless grade-school dances (and parties, let's be real, this shit never ends) so much as swirling surrealistically around them—the petty rejections and evasive moves we romanticize as part of the process of growing up (which leads to so much insecurity and angst that spills into other areas, like, say, finding a job — it's truly real what is being hazed around!).

I hunger for this kind of ingenuity and approach to a subject matter that I very much get (vaguely, I'd ponder, it's the discovery of sexuality at a young age and all the arbitrary and traumatizing rituals of [hetero]sexuality we're pushed into as kids — and how this will determine the course of our success, not just personal, but professional as well — but then in the second half, the subject expands into a generalized, neo-Lynchian study of Millennial malaise that has no specific root yet has roots everywhere: in the economy, in the horrific political scene, in school loans, in wishing you were just 10 again when all the bullshit was miles away?) but approached through a totally uncommon, de-narrativized, group-obsessed angle. Like with a lot of ambitious works like Twin Peaks: The Return or Slacker, I feel like a lot of useful-if-not-quite-accurate adjectives are going to be foisted upon this — oh it's Lynchian (and it is!), oh it's like Eighth Grade (and sure, yeah, to an extent! though obvs BB doesn't have the monopoly on grade-school blues), oh it's jokey like The Lobster (and it is, sort of, though I think Taormina's vision is far more grounded and less contrived and basic than Lanthimos, who's stuck at the same pitch) — in short, it'll be peppered with a lot of frantic adjectives, because people won't be able to figure out what the hell it is it's doing, or what we're seeing, or why Taromina is taking so long with his pauses in between shots. He pushes the audience to think outside the normal conventions set up by an identifiable indie narrative, but he does it with familiar subject matter that has wide appeal — love, Millennial malaise, outsider syndrome — and which is never left behind.

The strongest scenes are the massively ambitious group scenes (+ the family dinner, of course — heaviest Lynch vibes there, beautiful move to have the brother in college not being able to hear the dad). I'm especially in love with the selection process, set to this wonderfully out-of-time song in the vein of "Be My Baby" by The Ronettes. I love the movement of the camera around the space, also the edits between select members of the group who have only been established with a face and a couple of lines here and there. What's fascinating about this, too, is that Taormina is able to establish a character or a personality through just a face. That's something not typically seen; usually, people have to drown their characters with lines that are either clunky or poorly delivered, and they would have just been better off silent. Naturally, it gets unruly at times in its attempts to reach the Altman ideal, and our attention shifts in and out, because there's so (too?) many players at work at any given moment—but them's the works when you're trying to be original while hewing to a solid ensemble tradition. I like the wobble.