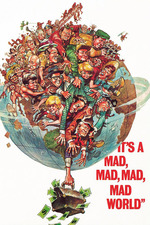 I had one of the most exciting encounters at a movie theater EVER yesterday, so bear with me.

Yesterday, I re-watched It's A Mad Mad Mad Mad World (Bland-ley Kramer, 1963) in glorious 70mm at LACMA! It's gotten a lot of hate around these parts for being cataclysmically unfunny. And while I can see why people would think so (Kramer has an awful eye for comedic direction, and the sheer pomposity of his statement that he would make "the comedy to end all comedies" makes me despise everything he stood for even more), I still really like Mad Mad World. The auteurs, if you will, are the cast, not Kramer. For every ill-timed Kramer move that brings the movie down, the actors' shuffling dances, mulish mugging, and overall ridiculousness elevate it. I'm always charmed by Jonathan Winters' puppy-dog trucker Lennie Pike, in particular. Plus, the plot is so ingeniously addicting (an ensemble movie about a bunch of bozos who search for a bag of money? Sign me up!) that I can't help but not fault it. It's a glorious childhood favorite of mine--seeing it many times on AMC--and I was so thrilled to see it in 70mm, the way this movie is MEANT to be seen. There is something so joy-filled and nutty in seeing the utter chaos that builds and builds and builds and never seems to have an off-button—there's value in this kind of slop comedy-epic pileups, I firmly believe.

But I have a maybe better story to go with this.

I was sitting one seat next to this guy in a green jacket who was laughing his head off at literally everything. He had a pretty annoying laugh and would always point out who was who to someone who I think was his girlfriend or wife. ("That's Rochester", "That's Peter Falk", " Alright, Buster Keaton time", etc.). We exchanged some glances during the movie, the kind that movie nerds share when they're enjoying this or that.

Then, the lights went up for intermission...and that's when I realized the guy I've been sitting next to for 1.5 hours (and the guy I'd spend 1.5 more hours sitting next to) was QUENTIN FUCKING TARANTINO. He asked me if I was enjoying it so far, and I was like: :O .

Some fifteen year old kid came up to him and personally thanked him for all the movies he made and finished off with "You rock, Mr. Tarantino." He was very humble about it, too, shook his hand, and thanked him for his kind words in return.

He loudly clapped when Jim "Mr. Magoo" Backus came on screen for some reason. He also has this curious thing where he laughs VERY hard at a scene that makes it sound like he's seeing it for the first time, but you know damn well QT has seen this movie 20 fucking times. (Probably all in 70mm.) He's seen the movie so much he knows the punchlines, and so he reacts harder. (Which is admittedly something I do.)