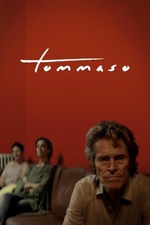 I guess one of the unique things about this film being released under quarantine was not only did I get to watch this at my home, but I also got to see Abel conduct a q&a from his home via Zoom. Although plagued by internet problems throughout, in true Abel fashion (even with full internet connection) he somehow still managed to disappear for most of the q&a, hang up while showing us his floor (to illustrate why he couldn't use a dolly indoors), bring his whole family on the call, and show us Willem Dafoe's apartment from his window!

The one thing that was present in nearly every question and answer though had to do with the "process." "Was there a script", "how much is based on your life", "did people know you were shooting", etc. And let's face it, Abel going into late Malick mode with his camera and shooting a drama on the fly as an expanded home movie makes for one of the most exciting films released all quarantine. Maybe too much so.

Not sure if I've seen it mentioned elsewhere, but as a product of a free flowing shoot, Abel expounded on one of the best extended sequences produced in the film. Willem being a theater performer, has no issue staying in character for extended periods of time. So apparently it wouldn't be uncommon for takes to be as long as 50 or 60 minutes. At one point, DP Peter Zeitlinger begins to follow Willem walking down the street, then as he enters the subway and on his entire commute only to see the man he thinks his wife is cheating on him with in a cafe. And apparently....Abel was in a cab trying to find these guys as they were shooting it!

Along with the lauded AA meeting scenes, it's one of my favorite sections of a film that may be too freewheeling for even me. Maybe it's because there's just too few standout moments like these in it. Then again, I can't tell if there's supposed to be.

The Zoom conversation ended while turning to Siberia and other upcoming projects, of which he has many, in the world of COVID. Abel has no plans of stopping but he did seem cautious in a way that is a bit out of character for the Abel Ferrara from years past. In a line I could imagine coming out of Tommaso's mouth Abel said, "After spending a lifetime trying to kill myself I don't feel like dying tomorrow."