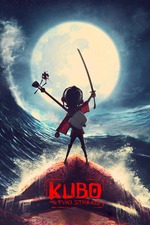 It's getting a rare feeling for me, to get my expectations hyped up and fulfill them in the cinema, but Kubo was just as amazing as I expected it to be.

The atmosphere and the voice acting (specially Rooney Mara and Charlize Theron) are truly wonderful. They really are. These two factors alone should be enough to justify buying a ticket, but overall the movie is strong too as a whole, even with some minor flaws in the story.

I loved how meta the story structure was, had an old fairytaleesque backbone and the really witty dialogues modernized and spiced it up a bit. With all that said, the quest itself felt a bit weak, Kubo could have deserved a stronger character arc, but it was okay. The only point where I was really expecting something more and schockingly new was the finale. That's where the movie lost half star from me.

To be fair I'm a huge oriental culture, traditional fairy tale, Rooney Mara and Laika fan, so I might be a bit biased (or a lot), but it's probably going to stick around at my personal toplist of the year.

p.s.: SPOILER: I feel like the title spoils away a potentional plot twist.