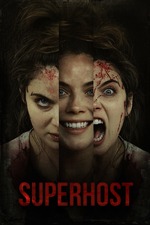 In this age of clicks, likes and subscribers, it’s easy to be cynical. People are perceived to be disingenuous as they regale tales of their perfect little life. There is a disconnect between what we see and the reality in which we live. Becoming a YouTuber has replaced being a pop star, an actor or a professional sports athlete as the new generation’s aspirations for fame and fortune, not being fully aware of how much of ourselves must be sacrificed in order to achieve this goal.

Superhost, at its core, plays to this idea of taking a peek behind the curtain and seeing what is going on to those that are desperately trying to hold onto their little slice of fame. Vlogs have to become more extreme than the last, just to hold people’s interest, but how far are people willing to go?

Sara Canning and Osric Chau put in solid performances as our intrepid vloggers, we even get a welcome guest appearance from the iconic Barbara Crampton, but the real star of the show is Gracie Gillam, who, apart from being potentially mistaken for an Olsen sister, manages to steal every single scene she is in. Some will find her performance over the top, even hammy, and whilst it does scream a little stage school crazy, she was that much fun to watch that she quickly became the main reason to continue on. A little improvisation here, a glaring look there, I would very much like to see her in everything… sign her up for John Wick 4, NOW!

Probably my biggest gripe with the whole thing was that it really didn’t know what it wanted to be, swinging wildly between trying to be a tense thriller to a dark comedy. Sure, this switch can be done, but it was so unevenly presented here that it never really makes up it’s mind, giving this whole thing a really odd tone. However, when it’s good, it’s very good, it’s just a shame those moments are too few and far between.

There is a nucleus of a really good idea, a criticism of social media and our devotion to it (says the guy doing just that), and with a bit more of a focus on what it wanted to be we could have been looking at something quite special, but as it is it’s a great idea done well enough to be entertaining, mainly down to a lead performance that was a hoot to watch.