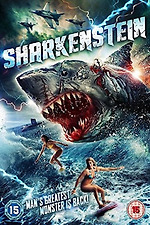 I thought I'd seen the worst of fuck awful edited in sharks when I endured Jurassic Shark for the first time. I was wrong. But this time, the shark looks like he's on steroids and made out of styrofoam. This film was terrible in almost every conceivable way possible, but if you're gonna bastardise Shelley's work, this is how you go about it. Having said that, Sharkenstein is shockingly boring given its premise. Oh and the shark is also a rapist *spoiler*

. The blood looks like Robinsons summer fruits squash and is the exact same edited in footage for pretty much every kill scene

. Me perfectly timing saying "this is so bad" just before Sharkenstein exclaims "it's a fantastic success!"

. The shark prowling through the woods reminded me of Oujia Shark

I can't believe I paid for this shite. Actually, yes I can.