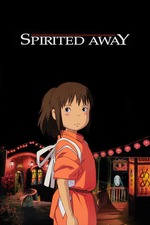 spirited away was one of the movies that i can definitely say I watched when i was a kid but i don't really remember anything past the first few minutes because the parents turning into pigs scared the bajeezus out of me. for most of my childhood the extent of my relationship with ghibli was having seen ponyo several times because ooh man that movie is comfy. several years later my parents showed us some ghibli films--castle in the sky, arrietty, totoro, the wind rises--that I hadn't seen before and I quite liked them but never really sought after the other films because i wasn't watching movies by myself at the time

flash forward like half of my entire life or whatever and two completely separate friends both recommend me this film for two different roulettes (thank u tanner & don love u boys) and being the person i am i of course did not watch it until like many weeks later. i haven't really been watching/doing much of anything lately, really. i spend most of my days sitting in zoom lectures not paying attention to classes, doing homework at the last minute, and then watching stream archives while playing browser picross. pretty much all my hobbies have been shafted in favor of unhealthy, addictive, depressive habits and the responsibilities of college life. pretty sure i haven't even cracked open my record player in a month and a half

anyways a few days ago i realized that current weather conditions meant that i could shirk my responsibilities a little extra bit so i could do something productive for once like, surprise surprise, watch a film. i really haven't had the emotional expenditure to try out new actual films which is why my diary is currently filled with rewatches of groundhog day and terrible superhero movies from the 2000s. spirited away was my first pick for a movie to watch because of roulette obligations and i felt that it would be a nice comfy movie to vibe out to late at night.

theres a lot of stuff about this movie that relates to my own life in ways that are too complex to go into or i dont really feel comfortable talking about at this point in my life but i was absolutely taken away by the depth and heart possessed by this film. ghibli and hayao miyazaki have sort of made this trademark stamp for these films that possess a unique sense of wonder and liveliness to them, where their characters meet strife and challenge and triumph over it all to culminate in this sense of wonderful hope and content, which is really ironic when you consider that miyazaki is probably one of the most bitter people working in the entire film industry. I still haven't really gotten fully acquainted with all of miyazaki's work nor ghibli's but im familiar with a few of the tentpole films (porco rosso, totoro, the wind rises) so at this point i have my feelers out for this man's work and creative direction

my relationship with my childhood has always been a really complex one, mired with a feeling of loss and absolution as a result of my learning environment. no friends, no real recollections, no childhood nostalgia. i've never really had real, concrete physical relationships with people and even now i struggle to feel that the friendships i have are anything but artificial. when the computer turns off, only my reflection in the screen remains. nobody to laugh with, nobody to cry with, nobody to hang with, nobody to be around

this is already like waaaaaay too much personal information im sharing on a dumb film site but writing, especially about film, is my only salvation and sanctuary for thoughts most of the time so being open here just feels nice i guess but anyways

my "state of being" or whatever u wanna call it has not really been very solid lately and it feels like i need a constant reminder that im an actual fucking person and not just some npc in a very terrible and boring video game. every day is the same--the same schedule, the same habits, the same breakfasts, the same wasted time. i feel like i've really lost a sense of my self in the last six or eight months. my relationship with my family has dwindled a lot and i rarely see them or talk to them because i shackle myself to a chair for ten hours a day in a basement browsing the internet and staring at code terminals and google docs. morning classes are the only thing that get me out of bed and i'll waste an entire day doing absolutely nothing. amidst all of this im struggling to understand who i am and what the fuck im even doing

i feel a bit like chichiro in that manner--one of the first things that happens to her as she stumbles into the spirit world is that she immediately starts to fade. she loses her connection to the material world which she heralds from and struggles to understand her place in this world that is so completely strange to her. she toils in manual labor and is able to repair those bonds and rekindle a sense of wonder but it takes time. achieving happiness and finding content is a trial and its something that i've struggled with for a long time and i still have hope that i'll find the other end of the tunnel some day. chichiro is grounded in her own ways--the various material joys of the spirit world and the companionship of her fellow workers ties her to a sense of self that keeps her determined, determined to survive, determined to escape. my heart broke when i watched her sob while stuffing down onigiri, displaying such raw emotion yet strength in the face of this horrifying, overwhelming new revelation that she's coping with. her companions like lin and haku help her retain her humanity through their own (thank u to nisk and mikey for being my own lin and haku, love u guys as well <3)

this world that miyazaki has created is one that feels undeniably human, full of sorrow and grief, but also joy and hope. in the face of desolation and greed, in terror and fear, there is hope and contentedness to be found in those small things that make us human. I've struggled to find what makes me human for a while because, well, i don't really know who i am. and that's a hell of a question in and of itself and i sure wish it didn't take so long to find out the answer. i do think that someday i'll figure it out, and i eagerly await that day when i get to touch the sun and the sky and feel it in the way that makes me happy to be alive. life is a game of waiting. sometimes you need to wait a really, really long time, and sometimes that really hurts, but eventually you stop counting the seconds and minutes until you realize you're not waiting anymore. i've spent my whole life always waiting for whatever's next and now i'm realizing that i've spent so much time waiting that i missed everything that happened in the now.

someday i'd like to write something thats actually about this film and not just my disassociation diary lmao but whatever i think this suffices for now. if anybody actually read this far thank you for giving me your time and i love you <3