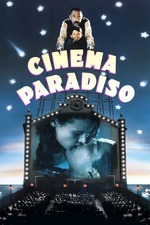 Forgive me for this review, I wrote it while half asleep after work and I don't feel I fully captured the magic of this film. Oh well, at least it will give me an excuse to watch it again and write a better, more fitting review!

There is a temptation to call Cinema Paradiso manipulative, after all, you're reading this on a social networking site devoted to film, so it isn't a hard sell when director Giuseppe Tomatore is pushing a film centered on the power and romance of that medium. However, I'm not that cynical, on the contrary, I think Cinema Paradiso is a gift, a present to everyone who loves film as much as we all do. The story centers on Salvatore, who receives a call from home telling him a beloved friend from his childhood has died, from there we experience Salvatore's life through flashbacks as he remembers growing up in a small town, and the friendship with a gruff projectionist that would change his life forever. So many of the films we see playing at the titular theater are romances, which is fitting seeing as this film exudes romance, and not just the traditional relationship kind. Everything about Salvatore's world is romantic, from his beautiful town and its quirky residents, to his beloved cinema and his relationship with Alfredo, the projectionist. Though there is darkness in the world, to be sure, the characters experience pain and loss, and the audience feels all of these things along with them. Did I feel manipulated by Cinema Paradiso, not at all, I was too busy being enraptured with the beauty of the film. This film is an emotional powerhouse, made all the more impactful because it allowed me to relieve my time as a projectionist, which might have been the only job I've ever really loved. Alas, life continues and we grow up and move on, but the important thing is to never forget the simple joys in life, such as seeing an amazing film, like this one.