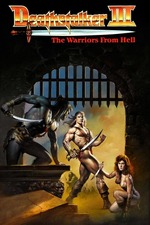 Deathstalker and the Warriors from Hell

Deathstalker and the Warriors from Hell 1988 ★

I assumed this was the first Deathstalker film and for some reason didn't bother to check. Turns out it's number 3. That's a shame, because I thought this could serve as a primer before seeing Deathstalker II sometime, which I hear is goofy fun. This one certainly isn't, but MST3k always helps. It did feel odd that everyone called him Deathstalker and reacted with great reverence like that meant something, without ever saying a word about what it was that it meant, but it's easy to explain away anything as bad writing in a movie full of it.

The most I can say is that the movie feels genuine, and it matches a certain low threshold of competence. That bar is basically things like the lighting allowed me to see what was happening, characters were in the frame, continuity didn't get completely wrecked, etc. Faint praise, sure, but I've seen some things. I can't give this more than 1 star for how terribly boring it would be without the riffs, but the gulf between this and a .5 is enormous. It's... a movie. Sometimes even that is hard to say.

Really it's just the most dull standard fantasy: a man with a (very fake) sword travels around looking for some magic mcguffins. The hero is terribly smug and unlikable from the beginning and the villain is perhaps the least intimidating I've ever seen. He's closer to middle management than an evil wizard. The only redeeming quality is that his evil army wears paper bat wings on their helmets. I think if Satan makes you wear silly hats you're probably the Warriors from Heck, not Hell.