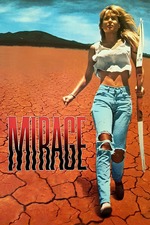 There are small moments here where the bad movie charm activates. There's the absolute inanity of every single word spoken, the bizarre way every line is delivered, the incoherence and pointlessness of the plot: this movie really has it all. For the most part, though, the movie is just bad. It's a desert film that seems to only briefly remember in one scene that it should probably be convincing me that the desert is hot. It does at least feel isolated and vast.

I'm sympathetic to the lack of budget, crew, real actors, and pretty much everything else that goes into creating a movie, but I'm not convinced, based on this, that more resources would allow Bill Crain to do something great. I can't see this as anything but an inferior copy of other movies, following the exact slasher tropes very closely.

The gore effects were surprisingly pretty good at times at least, though they alternated with being terrible. Plus the villain is... funny, though simultaneously really offputting (in a not entirely good way?).

I don't know, this is one of the reviews I'm most displeased with in a long time, but I just don't think Mirage is interesting enough to inspire anything worthwhile out of me. I found the abysmal dialog charming for the first 5-10 minutes, but then it took over half an hour for anything to happen (unless a montage of breast flashing counts as something happening), and it certainly wasn't spending that time building tension. After that point it took a lot of effort to keep my attention on it.