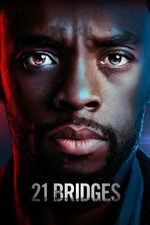 I didn't really know what to make of "21 Bridges" from its trailers. It didn't appeal to me.

This means that the marketing department for this film sucked at their jobs, because "21 Bridges" is a rip-roaring, edge-of-your-seat cat and mouse action thriller that I thoroughly enjoyed. It's the sort of cop-based action flick they used to make by the score in the 80s and 90s and have rarely made since. It's a glorious sort of throwback movie, and it hit a sweet spot within me that I didn't even know was starving for attention.

"21 Bridges" begins with the main character as a young boy, attending the funeral of his police officer father who has fallen in the line of duty. It then jumps forward a couple of decades to catch up with that boy as an adult, now played by the late, great Chadwick Boseman. He is at a hearing conducted by Internal Affairs over someone he shot and killed. His record is full of such incidents: he kills one perp each year, it seems. He gets prickly about this line of questioning and then goes home to care for his aging and ailing mother.

Hours later he is called into duty when two criminals kill 7 police officers while stealing cocaine from a restaurant that is a front for such operations. Boseman has been called in because of his propensity for killing suspects, and this makes him instantly, and understandably, suspicious. He finds out that the suspects are in Manhattan and closes off all access routes out of the island in order to trap the suspects and capture them...alive, if at all possible, much to the chagrin of an overbearing captain played by J.K. Simmons.

The movie manages to elicit sympathy and understanding for these suspects (Stephan James and Taylor Kitsch) while also immersing us in the mindset of our hero (Boseman) who is pursuing them. It practically crackles with electricity and moves like a rocket, peppering the narrative with little character touches and details while rarely allowing the audience to catch their breath. This is a riveting, action-packed nail-biter of a film that boasts interesting characters, a compelling central mystery and premise, and a great plot. The action sequences are strong and have enough novelty to them that they don't feel like the standard issue shootouts and car chases. Director Brian Kirk (with whom I am unfamiliar) stages them creatively and coherently. The movie is intelligent and muscular and deeply involving. It engages the brain and the adrenal gland in equal measure. Boseman is terrific in this, a riveting protagonist that isn't the cookie-cutter cop character that most of these movies feature. Like Denzel, Boseman brings a depth to this film that a lot of actors probably wouldn't even have bothered with. I would have loved to see him make a few more hard-edged action films like this. But at least he made this one, and I will be returning to it. I liked Sienna Miller a lot here too. In fact, I didn't even recognize her or know she was in this until I looked this up on IMDB just now.

If anything it might move a bit too briskly at times and there were some developments and moments that I feel probably wouldn't hold up to deep scrutiny (even on this first viewing there were a couple of elements that feel kind of glossed over). But "21 Bridges" is an action movie for grown-ups set in a gritty and violent world, and I feel like we haven't gotten a movie like this in forever. It's refreshing, smart and very satisfying.