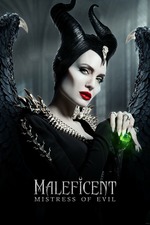 I don't know where Angelina Jolie has been for the past few years, but I missed her. I guess I didn't even realize how much until I watched her triumphant return here as Maleficent, everyone's favorite evil queen or witch or whatever.

The original "Maleficent" wasn't the best movie I have ever seen or anything, but I thought the twists and unique slants it put on the "Sleeping Beauty" story was kind of neat. I mean, it had massive flaws but it had some thematic bite to it as well. I didn't have a lot of hope for this sequel (it feels like a decade since the original film...I know it wasn't, but it feels that way and I blame our accelerated culture) but I was still interested mostly because I like seeing Angelina play this character (she was pretty great at it in the first film) and because Michelle Pfeiffer was involved. Honestly, I love Pfeiffer and would watch her in virtually anything. She's one of my all-time favorite actresses. This time Aurora (Elle Fanning) is marrying the prince of a neighboring kingdom. Maleficent begrudgingly agrees to meet her future in-laws at their castle but, well, things go wrong and suddenly the two kingdoms are at war with the humans of the neighboring kingdom trying to wipe out all of the magical beings that look to Maleficent for protection.

This movie has a real delicious dark streak to it and I really dug it, to be honest with you. Characters are dying right and left. The villains are trying to perpetrate an honest-to-God genocide. Sure, they use magical means to achieve this but seeing innocent little beasties turn to dust isn't a lot less disturbing than seeing them bleed out. This movie is downright vicious at times. It has a real bite for what is essentially a kids' movie and the stakes could not be higher. There's real suspense to be found here. It's probably too intense for some kids (not mine, but I feel that they handle this stuff pretty well) but I found myself on the edge of my seat for much of this film and, well, I did NOT anticipate that. Like, at all. The action was pulse-pounding and the visual effects were remarkable, a vast improvement over the original.

Angelina, Elle Fanning and particularly Michelle Pfeiffer are all pretty great in this. I don't know if I've seen Pfeiffer play this evil of a character before, even when she's played a villain in the past she has done so with a kind of drollness that makes her fun (like in "Stardust" and especially "Batman Returns"). She's not really fun here, she's just kinda terrifying and, again, I dug it. I liked the colony of similar creatures that Angelina discovers and bonds with (those wings are awesome) and, hey, it's always nice to see Chiwetel Ejiofor pop up in anything.

"Maleficent: Mistress of Evil" is a pleasant surprise with a welcome bite and some welcome thematic resonance too. Here's hoping that this signals Angelina's return to the big screen. She's never been someone I would count among my favorites, but I can't deny that it's great to see her again.