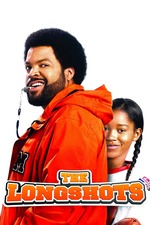 This could quite possibly been really cheesy if it wasn't for Ice Cube.

Cube avoids dwelling into the angryblackman category in which he've been typecasted as alot in his career and pulls a more low-key dramatic performance and that's something we just don't see him do enough of these days cause he does it really quite well.

KeKe Palmer plays the young girl who aspire to become the first female football player in a football tournament, and she does reasonably well, but yeah it's definitly Cube who steals the show here.

Was suprised to read the endcredits to find out that it was Fred Durst, leadsinger in Limp Bizkit who directed it. Not exactly the type of film you'd expect him to direct if he directed a film.

The script is a bit typical but I didn't expect too much in terms of that.

Was it just me or was Ice Cube's beard changing appearances quite alot though, ocassionally within the same scene?