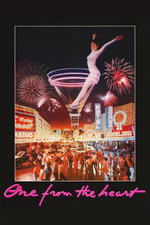 One from the Heart

Francis Ford Coppola’s reputation is still built on the four films he made back to back in the 1970s, The Godfather, The Conversation, The Godfather Part II and Apocalypse Now. It is a flawless run of ambitious, adventurous, yet still classical American filmmaking. Literate and lyrical, political but not of politics. I think that his next film One from the Heart is of that calibre, and the list should be amended to include it.

Probably the most famous aspect of the film, nowadays, is the album that accompanies the film. Tom Waits and Crystal Gayle soundtrack-defining album is an amazing piece of work, even outside of the film. It is an album I have been listening to almost constantly for fifteen year and it never gets old. It is romantic, jazzy and funny. A perfect album. So it is fitting that this is how the film is remembered, because One from the Heart is very much a musical, where Waits and Gayle counter the actions on screen, without directly commenting on them. It is a film built to a soundtrack, without needing to ape it. As a musical, the film is effortlessly cool, with Waits boozy vocals, mixing with Gayle’s cut-glass delivery to make the film endlessly watchable. While Frederic Forrest and Terri Garr play out the emotions of the songs on screen.

The first time I saw the film, when I was 17, I thought it was an unfair set of romantic tension. How could Forrest compete with Raul Julia, how could Terri Garr compete with Nastassja Kinski? While I still feel the same way about the Forrest and Julia comparison (come on Raul Julia in a tux, no chance); Terri Garr gets more and more appealing the more I watch the film. Garr could do a lot better than Forrest, with his terrible haircut, and certainly better than Harry Dean Stanton and his perm; she moves beautifully across the screen and has a sexiness that becomes more apparent each time I watch the film. Her performance is easily the best in the film, appealing, funny and smart. I was looking at her filmography today and it is a real shame that she did not manage to do many other roles of note.

Frederic Forrest is a good actor, but he perhaps lacks the requisite light touch, however the rest of cast is superb. The striking Kinski, the comic Stanton.

Outside of Garr the star of the film is Las Vegas. Or should I say the set design. The film was shot almost entirely on studio sound stages and it has that musical artificial look; it looks amazing, a neon, plastic set, bedecked with draughty reds and greens, while the attenuated sets drift into the background painting. It is shot like you are having a dream about a stageplay. Dean Tavoularis’ production design and set is audacious and a great approximation of a dreamlike Las Vegas.

Francis Ford Coppola directs the film with visual wit, extracting fine performances from the cast, while crafting a whole world out a gossamer of transitions and ideas. A giant, blue Kinski singing out of the background is a visual I will never forgot. One from the Heart deserves its place in the top level of American film, and when it comes to musicals, it easily takes it place alongside The Umbrellas of Cherbourg and Singin’ in the Rain. Masterpiece.

Looks like you spent the night in a trench
And tell me,
How long have you been combing your hair with a wrench