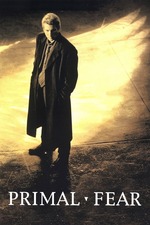 Richard Gere should have won the Oscar in 1996 for Best Actor for Primal Fear. Geoffrey Rush won for Shine. The others nominated were Tom Cruise for Jerry Maguire, Ralph Fiennes for The English Patient, Woody Harrelson for People vs Larry Flynt, Billy Bob Thornton for Sling Blade. Not exactly a vintage year, and yet Gere never got nominated. Never has been, seemingly never will. Yet, he is great in Primal Fear. The film is essentially a straight-forward, genre, thriller but Gere blinks it into high gear. He stares into the distance, grins occasionally and brings depth to a character with none. Ed Norton got nominated for his actorly pyrotechnics, but it is Gere who steals the show.

Primal Fear is a great, fun thriller. It is preposterous. It is silly. It has a good script. It is directed with classical skill. It is very 1990s. Wish they would make more films like this. Wish they would recognise that Richard Gere is a genius. In his own way. And he still should have won the Oscar in 1996.

Sinatra: All or Nothing at All