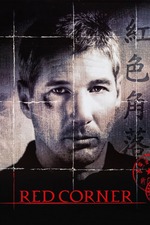 Red Corner plays like The Fugitive, with Richard Gere instead of Harrison Ford, but instead of escaping, we just see a really long Chinese court-room trial. It is not as bad as that sounds, but there isn't really any tension since we know that Gere didn't commit the crime he is on trial for. However, as a solid procedural, it is pretty enjoyable.

Jon Avnet could be the most boring director in Hollywood - his filmography as director as follows: Fried Green Tomatoes, The War Up Close & Personal, Red Corner, 88 Minutes, Righteous Kill. That is not a filmography to inspire confidence, so it is no great shakes to say Red Corner is his best film.

It is a solid procedural, that has an interesting setting in China. Richard Gere is as good as he always is. The most solid actor imaginable. While, Bai Ling offers pretty good support as his lawyer. Bradley Whitford turns up for a bit, so does James Hong, while Jessey Meng impresses.

Not a great film, but reasonably solid and entertaining. I like a '90s mystery thriller though.