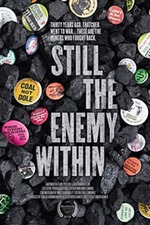 Still the Enemy Within

Brilliant documentary about the longest strike in UK history. Over 1984 & 1985 the miners suffered at the hand of Thatcher and a worryingly aggressive police force as they protested against mine closures.

Hard to believe this was 30 years ago and the impact it still has on society today.

Unrelated to the film, but often featured, are the numerous posters and signs used in the protest, which have inspired a typeface and book.

Going Clear: Scientology and the Prison of Belief