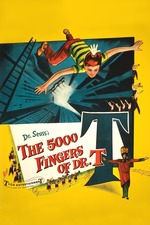 This film is one of those lost films that I had heard about and was intrigued by but never had an opportunity to see. A film inspired and partially written by Dr. Seuss sounded like an amazing thing. There is a reason that this film is mostly forgotten.
For a film that is based on whimsy it is criminal that it is so lifeless and dull without any energy. It lives in a dream and therefore has no stakes and the musical numbers stop the film dead in its tracks. It lacks the wit and charm that characterized Seuss' books and made them so timeless. Frankly, this was a chore to get through.
It does have some good qualities. The set design, at times, captures the spirit of Seuss' world with narrowing corridors, stairwells to nowhere and asymmetrical costumes. There is a scariness to some moments that is welcome, particularly in the ride to the dungeons. The rollerskating twins with the conjoined beard was inspired as well.
Each of those qualities are brought low by the lack of eye popping colors and the blandness of the spaces, something that Seuss would never be accused of.
Sadly, Hollywood has never really been able to capture Dr. Seuss' work on film. It is either too overstuffed, too garish, too simple, or lacking the social bite. Perhaps that is how it should be. The books of Seuss are timeless. The films will never be.