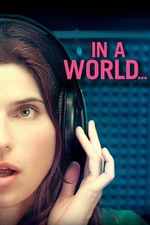 In the growing field of voice over acting, it is important to be able to create an iconic voice, that tone that will set you apart. And in IN A WORLD, director/actor Lake Bell set about creating her own creative voice, quite successfully at that.

The film follows Carol, a vocal coach that is the daughter of one of the legendary voice actors that is still working. Her father, Sam Soto (played by Fred Melamed), just released an autobiography and is set to receive a lifetime achievement award, yet he still feels like 2nd place in comparison to Don LaFontaine, the deceased King of Movie Trailers. He compensates for this by hanging out with supposed successor (Ken Marino), and dating a girl a whole year younger than his youngest daughter.

Carol is kicked out of her father's house and is forced to make it on her own, which she really isn't capable of doing at first. Immediately, she relies on her sister (Michaela Watkins) and brother-in-law (Rob Corrdry). The couple is already on rocky ground yet they accept Carol into their home anyway.

To get on her feet, Carol gets her friend Louis (Demetri Martin) to land a side gig as a voice actor. Suddenly, Carol finds herself in the running for some high profile jobs much to the chagrin of her father and his successor.

Full of wit and heart, IN A WORLD is a great directorial debut for Lake Bell. She  wrote a hilarious script that veers from funny to heart-breaking and back again, without being overly schmaltzy. It has one of the best ensemble casts I've seen, and everyone performs wonderfully in it. Melamed is highly entertaining as the star not willing to give up the spotlight to anyone, not even his own daughter. And Marino is great as the "next big thing" full of his own potential.

IN A WORLD is highly recommended for anyone in the mood for a comedy with substance. It will have you laughing throughout while getting a nice little peek into the world of voice acting.