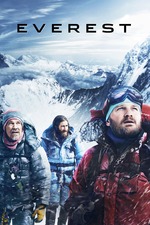 This is film is okay, at best. I clicked that little "like" on and off several times. Did I like this movie? Ultimately I can't say I did.

I liked little pieces of it, Everest is not a complete mess but it's also not a high quality film. Technically the film looks great, if I didn't know this was a fictional feature film you'd have a hard time convincing me that this wasn't filmed on a mountain. Also, a few of the actors were quite entertaining to watch; Jason Clarke, Keira Knightley, John Hawkes and Jake Gyllenhaal give above average, if not great performances in under written parts.

But all of that didn't add up to a satisfying whole, director Baltasar Kormakur (of 2 Guns fame) can't raise the stakes. He starts the story and finishes it at the same level. I felt myself watching the film thinking oh that's sad, or oh that looks great rather then feeling sad or being amazed by what was put on screen. It's a rough watch, there's harley a full character on screen, there is hardly anyone to root for, and there is no depth at all to anything on screen. Sadly on of the worst performances goes to Josh Brolin, a normally very solid actor, he's given nothing to work with and seems to have very little direction for this lackluster character.

Everest falls flat, if you're going to watch it I guess go to the theatre as the big screen is best. But overall the flaws out weight the good. It's not terrible but it's also not much more then a Sunday afternoon time filler.