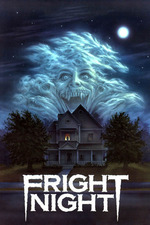 I really loved the tone of this movie in the first half before it got more into actual monster and heavy makeup/effects territory.  That stuff was really good too - especially for 1985 - but this movie is at its best when Chris Sarandon is on screen (in his normal human-looking form) just being a total badass with acting that doesn’t even seem from the same decade as the rest of the cast. Geez, the dude that plays Evil Ed?  No thanks.  A different casting choice there could have made a big difference - or maybe that’s just the way the character is written but... no.

Having watched both this and Lost Boys recently, I’d have to say I slightly prefer Fright Night as far as 80s vampire movies go.  This is a solid mid-80s horror flick that holds up pretty well 35 years later.