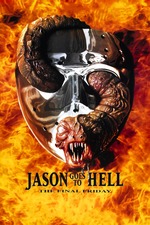 Good lord this aged badly.  I mean, it was never good but I certainly gave it a pass as a kid.

-Jason is on screen as someone else most of the film.
-That means Kane Hodder stars as Jason and is barely in the movie.
-Jason lights a fire and gives someone a clean shave.  No, seriously.  He puts shaving cream on another man’s face and shaves it before transferring his soul into that body.
-Jason is a slithering demon worm.
-Jason has dialogue… kind of.  Even though every previous body Jason inhabits resembles a walking zombie, he looks normal in the last body he tries out, even aiming guns at people and talking.
-Let’s make Jason possessed by hell demons and only killable by a blood relative because we saw that work so well in Freddy’s Dead two years earlier and that movie was goddamn amazing!
-Wait.  How was Jason even back at Camp Crystal Lake?  Last time we saw him, he evaporated into a child in the sewers of Manhattan.  This is the first movie in the series to just completely bypass explaining Jason’s return.
-Wait.  Why the hell did they fly his remains to Ohio.  Do you know how far New Jersey is from Ohio?  What’s wrong with New York or Philadelphia?

This movie just seems so out of place in the franchise.  It just doesn’t feel like a Jason movie to me.  Kudos for trying something different I guess but it doesn’t work for me.

I did think the gore is pretty good in this.  I’ve always enjoyed the Creighton Duke and Steven characters.  The Freddy cameo at the end blew my mind in 1993.

I didn’t like much though and I think this is hands down the worst film in the franchise.