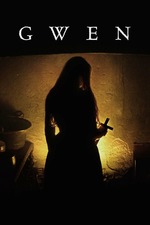 Although this film is not a horror film (if it is, it's on the VERY fringe of it,) Gwen might be one of the heaviest, dark, and horrifying films of the year. It's a dark drama with phenomenal and subtle performances, a damp and terrifying concept in its themes about power and the forced hand of innovation, and a familial implosion. For a film with relatively little plot, it's layered as hell and it manages to say so much with very little. It is NOT a film for everyone with its intentional slow pace and minimalist approach, but it's a gem for the year in execution.

Castle in the Sky