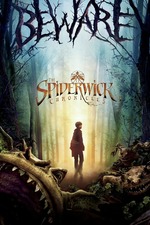 Like 'Lemony Snicket's A Series of Unfortunate Events' before it, 'The Spiderwick Chronicles' shows Dreamworks Pictures and Nickelodeon taking a beloved series of children's novels and adapting it all into a satisfying, enjoyable, under-two-hours feast for the eyes. Unlike Brad Silberling's excellent adaption of the Snicket novels, however, the Mark Waters adaption of 'Spiderwick' fails to be anything close to definitive, capturing the spirit and candor of the novels while struggling with the tone and cast of characters. The first thirty minutes are blissful, spooky and promising, but close to the one hour mark the film shifts its focus from mystery and wonder to big CGI sequences, which are entertaining and well handled, but are far less interesting than they should be, due to the movie's main flaw: it shows and develops only the malevolent creatures of the Spiderwick realm, casting nearly all the more noble and well-developed creatures (such as the Elves and Dwarves) to the side. There are many many creatures from the series that I had wanted to see in this movie, but in their place we get . . . goblins. Could be worse, but far too much time is spent on chase sequences featuring those slobbery running buggers, time that could have been better spent exploring the kingdom of the Elves. That above all is my main disappointment.

This is a good and entertaining movie, however, and is well directed by Waters. Nick Nolte is a fabulous Mulgrath, I loved Seth Rogen as his CGI character, and the cast of children (especially Freddy Highmore) does a fine job portraying their characters. James Horner's score is one of the best he ever recorded, featuring wonderful, sweeping themes that perfectly capture the excitement and mystery of the story. And the visuals are sumptuous, creative and overall excellent, managing even to look believable at times (surprising for a Nickelodeon production, and one from 2008 to boot.) I greatly enjoyed this film, but thought that it would be better served as a franchise opener than a one-swing standalone adaption. There's got to be more hiding away in that forest than Nick Nolte in a bathrobe and Seth Rogen's slobbery mug (as entertaining as both of those might be.)