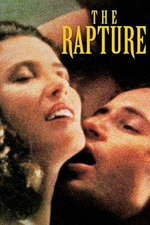 The Rapture is a fascinating oddity. It is pretty out there and definitely fucked up. The presentation is really calm, which makes its strangeness stronger. The Rapture explores Christianity, looking at it as a more literal cult and delusion. It treats religion as a false cure to insecurity and depression. It also confronts head-on the bizarre desire by some for the rapture to happen. It is definitely about that dark obsession so many have.

There's a really great thematic ending to The Rapture where our lead character is stopped by a police officer and her despairing dialogue is a great and ambiguous climax. Unfortunately the film goes on for another fifteen minutes, hammering home the indecision we face about whether God loves us, but essentially saying no more than before. Sometimes films have a great ending and it's a shame they're not the *proper* ending. Still, The Rapture may not be subtle but it's a twisted and intriguing piece that allows for a meaningful conversation about God.