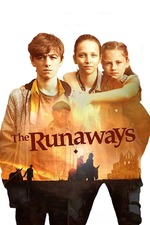 Nowadays, there’s not many films made for children that have a real toughness to them. The Runaways is one such film, set in a greedy and difficult world. Its narrative may be a little Dickensian in its depiction of gritty hardship and childhood suffering, but this is a distinctly modern tale, dealing with the pain that can affect children in a world of unreliable parents. The Runaways is about poverty, or struggle more broadly, and yet has a strong central plotline that makes it very suitable for children. There’s nothing easy in the world of The Runaways, but that is why it’s compelling and why it matters to bring working class stories to our children’s lives.

Filmed amongst gorgeous Yorkshire scenery, The Runaways crafts a tale out of real locations. Anyone who has spent significant time in the North York Moors will certainly be able to attest that The Runaways captures the rugged landscape well and that the geographical logistics of the plot are fairly sound (excluding a few nitpicks). Whilst The Runaways is fuelled by classical child-centric melodrama, its world is very real. The setting allows for grit to emerge naturally, with the plot growing out of the scenery rather than standing apart from it.

The cast in The Runaways do a fine job. Mark Addy and Tara Fitzgerald, both of whom are known for their minor roles in Game of Thrones, may only appear briefly, but their presence anchors the film, bringing pedigree to the otherwise plain presentation. However, it is the core child cast who most excel. Molly Windsor, Rhys Connah, and Macy Shackleton utterly convince as three lost children meandering across the moorland, their chemistry inspiring empathy for the characters. Molly Windsor is particularly noteworthy, and between this and Make Up, which premiered at the London Film Festival in 2019, she may have a minor breakthrough this year.

The Runaways has too many stumbles to be a great film, with a plethora of mediocre supporting characters and one particularly cheesy twist. However, it still comes together very well. Its depiction of lonely children in the wilderness, backlit by purple Yorkshire heather, is powerful. This is a film of details, of pint glasses sipped, of water poured onto a fire, of dirtied clothes clung onto. There are many reasons to like The Runaways, and a film which can successfully alternate from singing for joy to crying in a lonely world is clearly made with skill and passion.

Read this in Outtake Mag