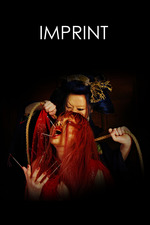 Imprint is my favorite episode of Masters Of Horror and that is pretty much thanks to Takashi Miike alone. Right of the bat, I also want to say, that this isn't perfect, like my rating would make you suggest, but it so typical for Miike and perfect for him, that I just love it.

Imprint is the story of an american coming back to Japan, as he is on the look to find his love from earlier, as he promised to her. Soon he finds out, that she is dead and learns the truth about how and why it happened.
It's absolutely okay to believe, that this is all what happens, but that is absolutely not true. Miike pulls many twists and turns, so you soon are just baffled about what to see. What starts out as a character drama containing Billy Drago and many deformed lowlife prostitutes, changes soon into incredibly gruesome torture stuff, just to change even further. The effects are great and the turn into full on madness is what makes this episode of MoH so special to me. Cigarette Burns may have been Carpenter's last great movie and was greatly done, but Miike just didn't give any fuck and created something, which was totally show defining.

All this lead to HBO not even airing the episode, as they only got their hands on the episode shortly before the airing and didn't know how to air this. It also gives for a wonderful making of in which the first thing we see and hear of Miike is him sitting in a super dark room, while he says westerners apparently saw his earlier movies as horror and thought he apparently was a horror director. So Miike accepted and did what Miike does best. He goes experimental and tries how disturbing he can go. That's what I love about Miike, even though I'm not a big fan of many of his movies.